In the past 2 years, TEDxTUM has been featured on several podcasts, giving us a chance to share our experiences in organizing an event with passion, dedication, and playfulness. We love the TEDx community and believe in giving back. Feel free to listen in if you want a behind-the-scenes look into how TEDxTUM comes to life.

“Solving for X” is a podcast for TEDx organizers hosted by Jay Herrati, Executive Producer of TEDx. Our license holder and long-standing team member Dora Dzvonyar was invited to share some of the learnings of the TEDxTUM team. She and Jay discussed how to empower a TEDx team to problem-solve creatively and independently. Dora also spoke about strategies for how to set expectations and build a team that is eager to experiment. You can learn about how our team evolved over the years and how we combine meticulous planning and reliability with playfulness and experimentation.

You can find the episode wherever you listen to your favorite podcasts: on Soundcloud, iTunes, Spotify, or Google Play.

“Hacking the Red Circle” is a podcast created for and about TEDx Organizers and the TEDx Universe. It showcases the many talents required to produce a world-class event worthy of the TEDx brand. It is targeted toward people who are thinking of producing a TEDx or have been involved with one and want to learn more. It is hosted by Mark Sylvester, who is the Executive Producer of TEDxSantaBarbara, has been attending TED for over 20 years and started producing his own TEDx in 2010, originally called TEDxAmericanRiviera.

Dora spoke about establishing a structure for the event that transcends the transient nature of being a student-run organization needing a stable core of people able to work well with the flexibility of the primary workforce. They also chatted about the fact that many attendees, influenced by German culture, want to be perceived as serious, and discussed how we encourage a playful atmosphere to counter this behavior.

The episode is available on all common Podcast sources on the episode page. 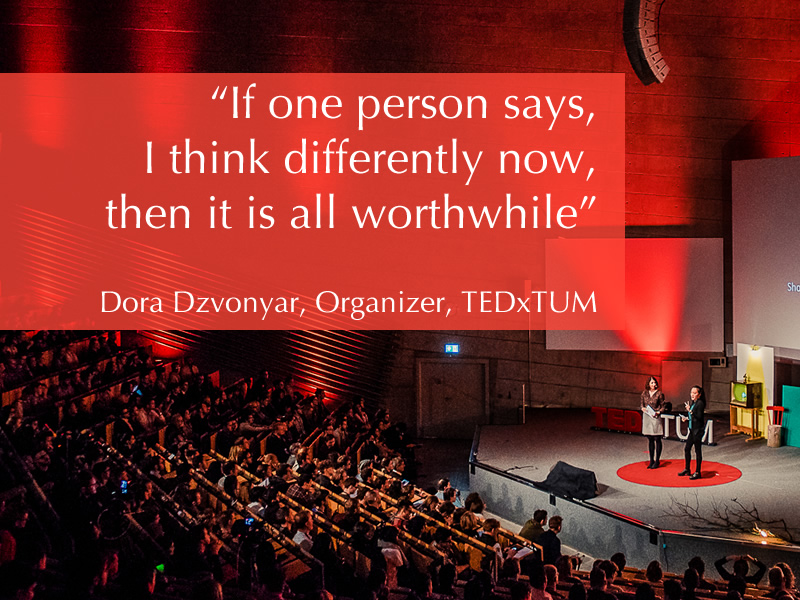